An Introduction to the S. Korean Music Industry

Before I start analyzing any video, song, or idol group, I would like to present a disclaimer.

I am an avid consumer of Korean popular music. I was introduced to Korean culture, Korean popular culture more specifically, a little over 5 years ago. I listened to my first Korean song (BIGBANG’s With U) and was hooked. I think that one of the reasons I became so interested in Korean pop culture was because it is a lot different than ours here in the United States. There are some aspects of K-pop bands that remind of American boy and girl bands back in the day. However, I believe that Korean popular music is in a category all on its own. Please note that as I am a consumer of K-Pop, my analysis and discussion will be coming from a biased point of view. I am not simply an outsider looking at these music videos for the first time, not knowing anything about them or the groups who are singing in them. Although I am biased, you might find that I do sometimes like to make fun of K-Pop. But, when I do, it is probably out of love. Now that I’ve set that on the table, let’s begin!

Korean Pop, or K-Pop as it is more commonly referred to as, is becoming one of the hottest genres of music, with articles appearing in international music magazines, and K-Pop artists having big hits on global music charts. Originating in South Korea, the genre pulls inspiration from popular styles such as hip-hop, R&B, dance, electropop, and others. International fan forums, multi-lingual news websites, and hundreds of blogs about K-pop and its fandom are just a portion of the subculture that has formed from this style of music. The question then is, what do “K-Pop,” “Hallyu Craze” and “fandom” mean? What makes K-Pop so appealing? And most importantly, how and why is it changing the lives of Korean and international youth alike?

Some of my main focuses are to identify what attracts fans to K-Pop, how K-Pop culture is spreading around the globe, the effect of it has on identity, and perceptions and representations of gender and sexuality in K-Pop.

The Hallyu Wave: A Brief History Of K-Pop

In order to understand modern K-Pop, it is important to know the modern origins of the genre, beginning with the aftermath of the Korean War and the American Occupation. It was at this time Korean popular music began to undergo many changes. When the United States Information Service began to recruit singers to perform at army clubs, it became a chance for Korean singers to make money. It also made a way for Koreans to be further influenced by Western music, and develop it into a form of it’s own.

In the late 1980s, one of the dominant music genres in Korean pop music was the ballad. Originally, ballads were folk songs or lyrical music written by poets and composers. In the modern sense, however, the ballad is a slow form of popular love song. With the smash success of Lee Gwang-jo’s “Gakkai Hagien Neomu Meon Tangshin (You’re Too Far Away to Get Close to)” in 1985, ballads became a popular form. Lee sold more than 300,000 copies of his album. The ballad trend continued on into the 1990s with hits by Shin Seung-hun and Lee Seung-hwan.

As the ballad boom was coming to an end in the early 1990s, a “new generation wave” started to hit Korea with the rise of the male trio Seo Taiji & Boys.

Creative and new forms of pop music began flourishing, and dance music also enjoyed a great advancement in both quantity and quality. Together, this contributed to a golden age for the Korean music industry in the 1990s. Formerly a bassist with the rock band Sinawe, Seo wrote “Nan Arayo” with a mixture of rap, plaintive lyrics, and heavy metal sounds. As this combined with the flamboyant choreography of the other two members, Yang Hyun-suk and Lee Juno, the band enjoyed a meteoric ascent to fame. Their fashion was another major focus of interest: teenagers copied the style with oversized jeans and T-shirts with the labels attached.

As rap soared in popularity, other acts began adopting hip hop styles. The duo Deux debuted in 1993 and quickly became a pioneering force in Korean hip hop music. This was followed in the late 1990s by other hip-hop acts like Jinusean, 1TYM, and Drunken Tiger.

The huge popularity of Seo Taiji & Boys led the music industry to recognize teenagers as a new audience demographic. With the mass media enjoying the growing power of Korean teenagers, the music industry shifted its focus toward teen-centered pop music in the 1990s. From the middle part of the decade, this fundamental change served as a stepping stone for the birth of idol groups.

With the 1995 debut of the male idol quintet H.O.T., the K-Pop scene truly began to be dominated by teen-centered boy and girl groups. Formed by SM Entertainment, H.O.T. became a major influence on the future of boy bands. Entertainment agencies began developing their own “star-making systems,” which would lead to the debuts of groups like Sechs Kies, S.E.S., Fin.K.L, NRG, Taesaja, Shinhwa, and g.o.d.

Many of the first-generation idol groups popular in the mid-1990s either disbanded in a few years or stopped performing together. Sechs Kies officially disbanded in 2000, H.O.T. in 2001, S.E.S. in 2002. The sextets Shinhwa and g.o.d. have not announced their disbanding, but also haven’t performed together for some time. Aging was the biggest reason for their decision. Moreover, most did not have strategies for maintaining competitiveness in the pop music market. Because the idol groups formed in the mid-1990s were developed almost exclusively by entertainment agencies, they did not have much chance to develop their own style of music. Their musical skills and talents were not enough to keep them afloat.

The biggest difference between current K-Pop idols and those of the mid-1990s and early 2000s lies in the individual capabilities of the groups’ members. Following the strategic outlines of their entertainment agencies, the individual members have played up their unique personality traits. In addition to adding more talented performers, another strategy for helping idol groups reach overseas audiences more effectively has been the inclusion of members from other countries. Nicole from KARA and Tiffany and Jessica from Girls’ Generation are Korean-American. In the girl group f(x), Amber is Taiwanese-American, and Victoria is Chinese. Nichkhun from 2PM is Thai-American, and Chinese Jia and Fei of miss A represents their group’s multicultural aspect. Agencies hold auditions all around the world, attracting a flood of non-Koreans hoping to become K-Pop stars. 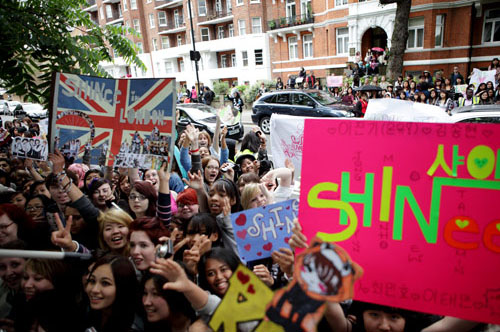 K-Pop is now spreading throughout Europe and the US, with many fans showing up at K-Pop concerts, cheering at the airport when K-Pop stars arrive, and organizing flash mobs to request more K-Pop concerts in their cities. The spread of K-Pop over social media websites like Tumblr and Facebook also contribute the growing sense of community between international fans, giving them a community in which they can interact with people their age, who share a common interest: K-Pop.

Now that we’ve got a basic understanding of K-pop, it’s origins, and some of it’s modern forms, we’ll get into the how, why, and who K-pop attracts.

In the mean time, enjoy this wonderful K-Pop music video by my favorite boy group, SHINee!