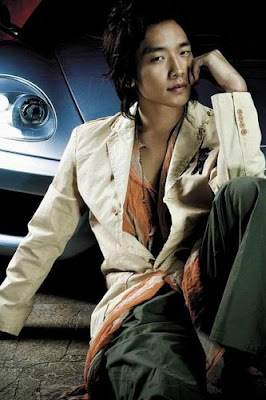 Rain (비), whose real name is Jung Ji Hoon, is by far the most sexualized K-Pop idol that there is today. If you’ve ever seen the American movie “Ninja Assassin,” you’ll recognize him; he played the main character. He was also in the Hollywood blockbuster “Speed Racer.” Rain is known for his sexy demeanor, shirtless stage presence, and soulful voice. He has been in the business for about 10 years and just recently returned from the military for his 2 year mandatory service.

‘Love Song’ is the video in which his famous shirtless body roll dance takes place. Rain has an incredibly toned body and his image is centered on his body. Probably known as one of the most masculine singers in K-Pop, Rain never fails to show his abs (I’m not complaining). I think that ‘Love Song’ shows two different aspects of Rain’s masculinity. First of all, he dances around with his shirt off, showing his perfectly toned body to the world. But at the same time, we see him as a nurturing and loving partner to the woman in the video. Like I mentioned before, masculinity doesn’t just mean looking tough; there is a ‘softer’ side.

Rain’s popularity extends far beyond Korea. He is known all around the world, even in America. As stated above, he had the lead role in an American movie. He can speak English, which also allows him to branch out to foreign markets. Steven Colbert has even featured Rain on his show multiple times! Giving fans in Singapore as an example, Sun Jung says that “the last convergence of Rain’s global masculinity is that of Japanese kawaii masculinity and momjjang masculinity. Kawaii masculinity is evident from the ‘cute’ aspect of the boyish image of Young-Jae while momjjang masculinity is evident from the sexual aspects of Rain’s stage perfromances. The former implies pre-adolescent masculinity while the latter implies post-adolescent masculinity. This sexually ambiguous pre-post-adolescent masculinity of Rain, it appears, resonates with the complex trans-pop-consumerist desire of Singaporean fans.” This mixed masculinity makes Rain appealing to people all over Asia, and around the world.

Rain is a great example of a mugukjeok idol. “Due to the pragmatic marketing strategies based on turbo-capitalism, Rain is culturally hybridized through the adoption of foreign popular cultural elements in order to appeal to wider audiences. This cultural hybridity constitutes the mugukjeok aspects of Rain’s stardom. It appears that this hybridized, globalized, and mugukjeok aspect of Rain resonates well with the trans-pop-consumerist lifestyles of the new rich in Asia,” Sun Jung says. Although Rain is a Korean superstar, his masculinity is marketed in a way that does not necessarily identify him as Korean. Also, his international success helps earn him recognition and followers in many different countries.

Next Time: Dream Girl: Femininity in K-Pop
This is a great music video by one of my favorite girl groups, Miss A. This song, “Bad Girl, Good Girl” has some pretty sexy dance moves and a catchy tune, but what really gets me is the lyrics. Generally speaking, the lyrics of K-Pop songs are tame, especially those of girl groups, but this song makes it quite clear that these girls don’t like to be judged. The captions are automatically in English, so you can see what I mean when I say that Miss A is not settling for less than anyone who can appreciate them. Haters to the left.