After presenting our discussion of Visual Culture and the role of the media, I began to draw connections to my case study. I would argue that language can also be considered visual culture, which was evident in the article about the taxis in Nigeria and the slogans or catch-phrases conductors use to attract passengers. During my stay in Kenya, I became accustomed to the matatu business–the ten to fifteen buses lined up along certain stops, calling for passengers to ride their bus, which also had painted slogans and stickers plastered all over them–some consisting o rap lyrics, others relating to religion. I remember seeing “Mo money, mo problems,” lyrics from American rapper Notorious B.I.G. to “R.I.P. Tupac” (another American rapper/legend) to “In God we trust.” 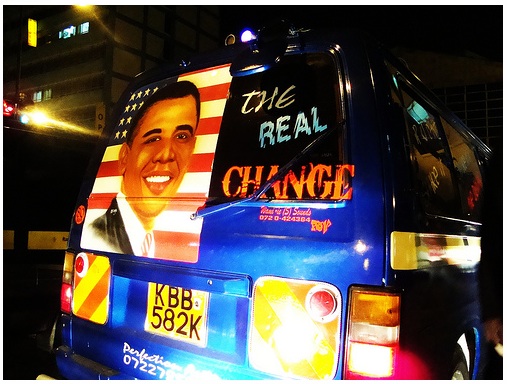 As we discussed in class, this visual culture comes as a result of capitalism and the consumer lifestyle and the flows of American pop culture (i.e. Biggie/Tupac) to Kenya and Tanzania. In addition, the Christian sayings or references to the Bible illustrate the lasting effects of colonization and European imperialism. While reflecting on this, I began to ask: What space is being created? Is it imaginary or real? This relates to Appadurai’s idea of mediascapes and how the flows of media infiltrate a space and these images created by the media influence language. I remember getting home to my host family after classes in Nairobi and my sisters would be watching music videos that seemed so Western to me, even though they were Kenyan rappers/singers. The scenes created and lyrics sung resembled popular music back home. Why aren’t these popular musicians being played in America and why aren’t they influencing American pop music? Again, this relates to the demand/supply cycle of capitalism and the ultimate domination of American markets. Meanwhile, American music infiltrates the home and the nightlife. Clubs and bars would play Kenyan music, but they also played popular American music, too. Now, it may seem like I’m digressing, but I would argue that this example of visual culture only exacerbates the influence of English as a dominating language versus the traditional Swahili. As a result of this visual culture, a new space is created.

To give you an example, I provided a song that was gaining popularity during my stay in Kenya. This video is the “Furi Furi” dance, which seems to be influenced by American pop and fashion and the lyrics themselves are English, Swahili, and Sheng–a mixture of the two. This example of visual culture illustrates the fusion of languages in Kenya, but does this create a conflict? Is one language better than the other? What space is created?

When I was with my urban host family, I asked my host sisters what language they thought in. They laughed when I asked this, and responded “English.” I was surprised by their response–but I guess if you look at Kenya’s education system and curriculum surrounding learning English, it makes sense. Yet, at the same time, they know less of their mother tongue, Luo, than their parents. Meanwhile, their grandmother spoke Luo, some Swahili, and no English. Thus, interactions signified different spaces and places depending on what language they “belonged” to at that particular time. Indeed, the use of the media creates a gap and transforms traditional languages.

Then there’s Sheng. In Kenya and Tanzania, the use of sheng is more and more popular, especially in urban areas. Sheng is basically a combination of English and Swahili that originated in Nairobi. Sheng “expresses the language of the people,” according to the following video.  That being said, sheng relates to identity. It is promoted in music and among peers, but what happens when a Kenyan or Tanzanian applies for a job? Then, they have to use English or Swahili. This creates a hierarchy of languages–is English more powerful than Swahili which is more powerful than Sheng? So, now what space do they belong to? Sheng creates territory, and at the same time, it deterritorializes native Swahili speakers. Thus, more and more local languages become extinct, making room for English and Sheng. If a language becomes extinct, what does that mean for a culture? Something to ponder…

This entry was posted in Allison, Individual Research Journal, Uncategorized. Bookmark the permalink.

1 Response to Visual Culture of Language