Oh. So There’s Something Wrong With my Pocahontas Halloween Costume? 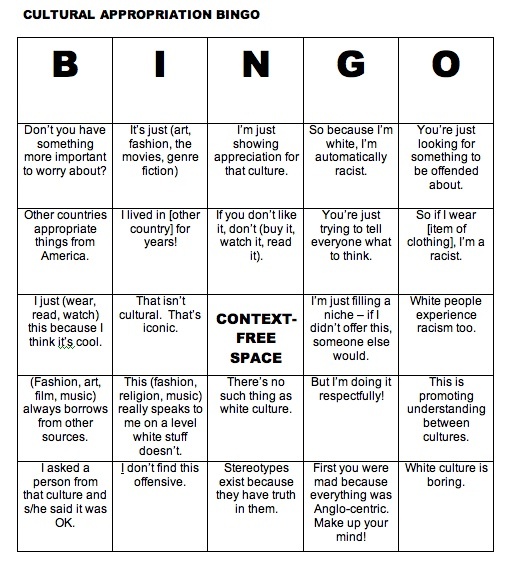 I never heard of the term “cultural appropriation” until I became a regular visitor on tumblr blogs. And as anyone who frequents tumblr can attest to, certain topics seem to arise frequently, depending on the types of blogs you visit. As I visited and discovered new blogs, I realized that there was a lot of anger on this thing known as cultural appropriation, an example that came up often was that of dreadlocks among people of non African-Americansor non African descent and the use of Native-American “costumes” So what exactly is this cultural appropriation that to me, seems to be causing lots of anger? According to Susan Scafidi, cultural appropriation is “Taking intellectual property, traditional knowledge, cultural expressions, or artifacts from someone else’s culture without permission…. This can include unauthorized use of another culture’s dance, dress, music, language, folklore, cuisine, traditional medicine, religious symbols, etc. It’s most likely to be harmful when the source community is a minority group that has been oppressed or exploited in other ways or when the object of appropriation is particularly sensitive, e.g. sacred objects.” For my research case study, I hope to focus on dreadlocks. Since I frequent many natural hair blogs, this was constantly a trending topic, and they were usually not phrased in manners that aimed to spare anyone’s feelings. (This might be why I was even more curious as to why this much anger seems to exist). However, the more research I did, the more I was made aware that cultural appropriation is a topic that is surrounded by a great amount of debate, ranging from what exactly cultural appropriation is(who gets to define it), to whether or not it exists, to if it is actually a bad thing. Not only this, but there is also a significant amount of debate on the difference between cultural appropriation and cultural appreciation, and whether or not cultural appropriation is avoidable or such a big deal. For example, Victoria Secret was recently under some heat for having a costume that seemed to be an appropriation of Native American culture. If one examines this, it is easier to classify this occurrence as cultural appropriation. But then when we look at things like yoga, dream catchers, the fashion industry, etc. and realize that there are many sides to the argument and that it is far more complication than a yes/no topic. I hope to explore these different sides and opinions in order to build my knowledge on dreadlocks specifically. I would also like to point out that when a culture is being appropriated, the parts of it that are being adopted can range from real cultural practices to imaginary cultural practices. This blog will act as a place where I collect information as I go, save quotes for future references, break down things for my learning benefit, etc. and in the end, develop an analysis on dreadlocks, it’s history, it’s status (cultural appropriation or cultural appreciation or just something that anyone should be able to wear) answering the questions I have posed above and some more.

This entry was posted in Individual Research Journal, Pipeloluwa. Bookmark the permalink.