Is Everyone Hanging Out Without Me (And Other Concerns) By Mindy Kaling: A Review! 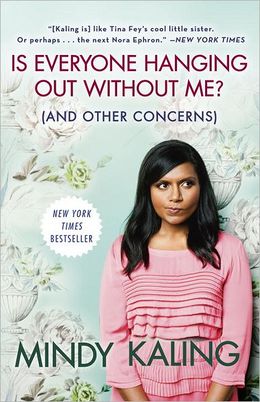 I spent this past Winter Break with my nose in books, which I haven’t done in a very long time. One of them was Mindy Kaling’s book. For those of you who don’t know her, she’s Kelly on The Office and now has her own show, The Mindy Project on FOX (it’s my new favorite!). It was a very fast read and I enjoyed almost every moment of it. It’s a hybrid of memoir and humorous essay, which I love. She starts off with her childhood and teens, of course. The title of her book comes from an essay about a high school experience that I’m sure we’ve had, and I could definitely relate to it. She then talks about her time at Dartmouth College and moving to New York City. My favorite part of the book is when she talks about her time at The Office , behind the scenes stuff, which I can never get enough of because I want to work in the television and film industry some day. I guess the main thing I got out of Kaling’s book was (I hate to sound cheesy, but) hope for my future. I’ll leave you with my favorite quote from the book:

“What I’ve noticed is that almost no one who was a big star in high school is also a big star later in life. For us overlooked kids, it’s so wonderfully fair.”

This entry was posted in Staff Reviews. Bookmark the permalink.